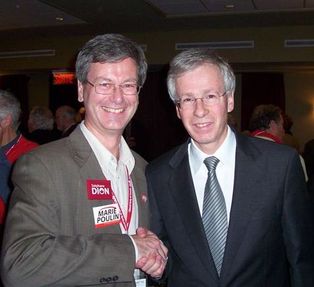 BERWICK — It’s not entirely coincidental that Liberal leader Stephane Dion’s Green Shift platform has echoes of a Tom Manley stump speech from the elections of 2003 and 2004, back when the Berwick resident was trying to capture this riding for the Green Party. Those who listened to the articulate organic feed mill operator during those back-to-back provincial and federal campaigns will recall him touting a ‘green tax shift’ — the idea of loading taxes onto environmentally unfriendly things while lowering taxes elsewhere.

Manley would go on to seek the national leadership of the party now headed by Elizabeth May, finishing second to then-leader Jim Harris in a 2004 vote. He went on to serve as a codeputy leader of the Green Party of Canada before making a shift of his own to run as the local Liberal candidate in the 2006 federal election.

Today, Manley admits making a “secondary contribution” to the development of the Liberals’ current Green Shift platform, whose more controversial elements include a carbon tax on home heating oil and natural gas. “I played an outside role, not a significant role,” he modestly stated when contacted by The Record recently. However, he conceded being in contact with a Dion policy advisor “while they were preparing” the Green Shift.

“We had numerous emails and suggestions and conversations,” said Manley, emphasizing he was only one of many talking to the Dion camp at the time. “I trust it’s because of those other people,” that the Liberals drafted the Green Plan, said Manley. But he also credits himself and others, like former MP John Godfrey, for implanting the concept of a green tax shift with Dion during the last Liberal leadership race.

A Dion backer, Manley served as his agricultural and environmental advisor leading up to the Liberals’ Montreal leadership convention. “During his leadership campaign, I did bring it up [a green tax shift]. He was reasonably new to it at the time. It obviously planted a seed,” said Manley, who had hosted Dion months earlier, when the then environment minister visited the local riding prior to the 2006 election.

He also acknowledges that the idea of a green tax shift per se is nothing new, having been “part of the Green Party platform forever.” “I’ve been supporting it for years, and I’m glad to see it proposed by a major party,” he added. Manley’s current connection to the Liberal Green Shift platform might be seen as emblematic of the recent shared DNA between the Greens and Grits. The parties have inoculated their leaders from mutual competition, agreeing not to run opposing candidates against May and Dion in their respective ridings.

The apparent familial ties had Conservative Prime Minister Stephen Harper complaining about May’s upcoming appearance in the Oct. 1-2 televised leadership debates. Though the Conservatives ultimately agreed to May’s participation, Harper has suggested that May’s inclusion was tantamount to putting two members of the same party on stage. For the first time, the Green leader will face off with the other leaders, even though her party has never elected a member to parliament. However, the Greens did pick up their first MP when a sitting member of the Liberals switched sides shortly before the writ dropped.

Having made the opposite conversion — from Green to Grit — Manley says he’s one of the Liberal volunteers now working on candidate Denis Sabourin’s campaign in Stormont-Dundas-South Glengarry. It was Sabourin who helped woo Manley to the Liberal fold in 2005.